From 591-597 CE, Ceol reigned the House of Wessex. He is sometimes referred to as Ceolric. According the Chronicle, he began his reign in either 591 or 592 CE. In 591 CE, he drove his uncle, Ceawlin, out of power at the battle of Woden’s Barrow in Wiltshire. According to Frank Stenton in Anglo-Saxon England the battle was fought at Woddesbeorg or Wodnesbeorg, probably the tumulus now called Adam’s Grave, overlooking the Vale of Pewsey. By driving out his uncle, Ceol took the throne from the “rightful” heir, Cuthwine. Ceol was the founding member of a sub house of the House of Wessex that was rival to Ceawlin’s house. Ceol’s house ruled Wessex on and off throughout 591-685 CE and was comprised of: Ceol, Ceolwulf, Cynegils, Cenwalh, Seaxburh and Centwine. After Ceol passed away, his brother, Ceolwulf, took the throne. It is uncertain whether Cynegils and Cuthgils are the sons of Ceol or Ceolwulf, so I took the liberty of making Ceolwulf their father, as it is mentioned to be so in the Chronicle.

From 597-611 CE, Ceolwulf ruled as King of Wessex. As stated in the Chronicle,

“A.D. 597. This year began Ceolwulf to reign over the West-Saxons; and he constantly fought and conquered, either with the Angles, or the Welsh, or the Picts, or the Scots.”

However, it is highly unlikely that he fought against the Picts or the Scots and his only recorded battle is in 607 CE when he fought the South Saxons. Ceolwulf had two sons: Cynegils and Cuthgils. Ceolwulf died in 611 CE.

Cynegils reigned from 611-642 CE. Cynegils is one of the questionable rulers of Wessex as there is circumstantial evidence that points to Cwichelm as the King of Wessex at the time. However, some scholars view that the King associated with Cynegils is the same as the King associated with Cwichelm. Other scholars view the Cwichelm was the son of Cynegils. Through my own research, I’ve come to the conclusion that some scholars have taken which is that Cynegils and Cwichelm were co-rulers (or co-Kings) from 626-636 CE and Cwichelm was the son of Cynegils. As explained by D.P. Kirby in The Earliest English Kings, while the Chronicle and the House of Wessex Regnal lists describe Wessex as being ruled by one monarch at a time, it is highly likely that there were one to three monarchs at any given time in the region.

The Chronicle states that in “A.D. 611. This year Cynegils succeeded to the government in Wessex, and held it one and thirty winters.” The Chronicle also lists that Cynegils and Cwichelm fought in the following battles:

Penda was the King of Mercia, which was an Anglo-Saxon kingdom in what is today known as the English Midlands. From this point on descendants of Penda marry into the House of Wessex often. I will consider further delving into Penda’s line at a later date.

Additionally, the Chronicle gives us information that we have not seen to this date thus far- baptism records:

“A.D. 634….This year also Bishop Birinus first preached baptism to the West- Saxons, under King Cynegils… A.D. 635. This year King Cynegils was baptized by Bishop Birinus at Dorchester; and Oswald, king of the Northumbrians, was his sponsor… A.D. 636. This year King Cwichelm was baptized at Dorchester, and died the same year. Bishop Felix also preached to the East- Angles the belief of Christ.”

It is important to point out that in this block of text the death date of Cwichelm is given.

The number of children that Cynegils had is unknown, however, I’ve put together a list of children while doing my own research:

Not much is known about Aldhelm, he probably died as a child. Æthelwine, otherwise known as Aethelwine or Ethelwine, is an Anglo-Saxon name that means “noble friend”. Æthelwine of Athelney was a saint in both the Roman Catholic and Eastern Orthodox churches. King Alfred visited the Athelney Abbey of which Aethelwine is the patron saint. Additionally, William of Malmesbury stated that Aethelwine had a chronic disease. Not much is known about him besides that.

Cyneburh, sometimes referred to as Kyneburga, Cynegils daughter, married King Oswald of Northumbria who was both Cynegils and Cwichelm’s godfather. Her name does not appear in early sources, but the Reginald of Durham refers to her as Kyneburga/Cyneburh. King Oswald is one of the eight Kings given the title of Bretwalda. Shortly after he died, Oswald came to be regarded as a saint. Bede states that the place where he died was associated with miracles of healing. His feast day is August 5. There are many churches and places named after St Oswald throughout Europe. It is believed that Oswald’s head was interred in Durham Cathedral. However, there are at least four other heads claimed to be Oswald’s head in Europe. His major shrine is Bardney Abbey in Lincolnshire, England, but the relics were transferred to St Oswold’s Priory in Gloucester, England. Cyneburh and Oswald had a son, Athelwald (Æthelweald), who became the King of Deira and did not have any children.

On the other hand, it is known the Cwichelm had two sons: Cuthred and Eamer. Cuthred lived until 662 CE and was a sub-king in Wessex, otherwise known as a West Saxon Princep. Nothing is known of Eamer.

Cenwealh was Cynegil’s son. You know how some families have that kid who is a mess up, been divorced a few times, gets into too many fights… loses a kingdom to his deserted wife’s brother? Yeah, that kid is Cenwealh. Cenwealh, sometimes called Kenwal, Cenwalh, or Coenwalh, was the King of Wessex from around 642-645 CE and from 648-672 CE. He was born around 615 CE to Cynegils. As stated in the Chronicle, “A.D. 643. This year Kenwal succeeded to the kingdom of the West- Saxons, and held it one and thirty winters. This Kenwal ordered the old church at Winchester to be built in the name of St. Peter. He was the son of Cynegils.” Again, I remind you that the dates for when people ascend to the throne are argued about between scholars. It is difficult to distinguish whether one succeeded in 642 or 643 CE.  Below is a plan for the “old” Winchester Cathedral. 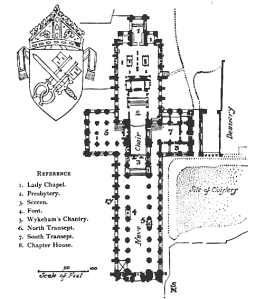 It is known that Cenwealh had at least two, possibly three, wives. His first wife, whose name is not known, was the sister of Penda, the King of Mercia. Cenwealh had a son with NN Cenwealh, named Clotaire of Mercia. But, their marriage did not last long as Cenwealh deserted his first wife. This caused Penda to “drive” Cenwealh from the kingdom and rule as King. As stated in the Chronicle, “A.D. 645. This year King Kenwal was driven from his dominion by King Penda.”

According to Bede’s Ecclesiastical History of the English Nation, Book III, while in exile, Cenwealh took refuge with King Onna of East Anglia and was baptised. As stated in the Chronicle, “A.D. 646. This year King Kenwal was baptized.”

The period of Cenwealh’s exile is often of debate because there is no clear evidence giving the length or the return of Cenwealh to power. However, since King Onna was killed in 654 CE and Penda was killed in 655 CE, it is often argued that Cenwealh became king around that time or shortly before. Many English scholars put the date around 648 CE.

Cenwealh eventually got married to a woman named Seaxburh who reigned 672-674 CE, roughly one to two years after his death, which was very rare.

Below is a picture of the mortuary chest that Cenwealh’s remains are in at the Winchester Cathedral.

The top of the chest reads:

Not much is known about Seaxburh besides that she was married to Cenwealh and ruled in her own right, which was extremely rare for a woman in Anglo-Saxon England. She is also the only woman to appear in a regnal list from this time period and is not recorded to have had any children. She died in 674 CE.

Not much information is available on Cuthgils, but it can be assumed that he was Cynegils’ younger brother because he never gained the throne, thus he must have died before Cynegil. Cuthgils had one son, Cenferth, who nothing is known of except that Cenferth had a son named Cenfus who died in 674 CE and, according to some sources, may have been King of Wessex or a sub-King at one point during the reign of someone else. However, this is disputed. Anyways, the family tree jumps pretty far in two years when Æscwine is the king. According to the Chronicle, in 675 CE, Æscwine fought Wulfere, Penda’s son, at Bedwin, defeating an invasion of Wessex by the Mercian King.

Æscwine had two children: Æthelheard, his son, and Æthelburh, his daughter. Æthelburh married King Ine, who was King of Wessex and we will get into him more later. Æthelheard married Frithugyth, the daughter of Wilburh and Frithuwold, and granddaughter of King Penda of Mercia and Cyneweise. Æthelheard was a West Saxon praefectus and died in 725 CE. Æthelheard and Frithugyth had one son, Cuthred, who became King of Wessex in 740 CE. So, we will touch on him later. It is assumed that Æscwine died in 676 CE.

Centwine, or Centwin, a son of Cynegils, became King of Wessex in 676 CE. The Chronicle states that in 681 CE, Centwine “pursued the Britons to the sea.” That and the year Centwine obtained the throne are the only events that are stated by the Chronicle on Centwine. However, according to other sources, Centwine won at least three battles during his time as King. He was pagan, but at near the end of his time as King, he converted to Christianity and in 685 CE, he abdicated and became a monk.

Centwine married Eangyth, who was the daughter of Irminfred (Eormenred). Irminfred was a sub-king in Kent and a count of Sachsen, in Germany. Eangyth’s mother, Oslafa, was a daughter of the King of Northumbria. Eangyth has numerous brothers and sisters spread out across England and Germany. I intend on looking into her lineage. Centwine and Eangyth had two sons, Oshere and Eadburgh, and one daughter, Bugga. Nothing is known about their sons, but it is known that Bugga became a nun and was eventually an Abbess.